Schedule Your FREE Fence, Deck or Screen Porch Estimate Today and Receive 10% OFF!

Please complete the contact form below and we we will get back to you within 24 hours.

We hate SPAM and promise to keep your email address safe.

Here at the Hal Co Resource Center find everything you need to know when you are learning about how to research, plan, select, design, and manage your outdoor home improvement project. Materials, permitting, HOA covenants, zoning regulations, building codes, environmentally sound construction techniques, industry news, and local information of interest are just some of the ideas waiting for you to explore.

Why Choose a Shadowbox Fence for Your Property in Woodbridge, VA?

Usually 6 to 8 feet in height, a shadowbox fence is not entirely private. When you look straight at it, you can’t see on the other side of the fence, but if you look at it from an angle, you can see through it. Your typical privacy fence has one pretty side, whereas a shadowbox fence at your home in Woodbridge, VA will be the same on both sides, appealing to both your neighbor’s home and your home. This explains why a shadowbox fence is known as the friendship fence, making it an excellent choice for fencing.

Selecting a shadowbox fence is a smart choice because it will hold up to the wind much better than a solid privacy fence. The wind can pass through it without putting as much stress on the fence. Normally a standard privacy fence will be the first to go during a major storm in Woodbridge, VA. The spacing of pickets on a shadowbox fence helps to withstand the impact of heavy winds.

A shadowbox fence on your Woodbridge, VA property will allow more air and light into your yard, giving it a brighter and airy atmosphere in which to relax. You won’t feel as boxed in as you would with another type of privacy fence.

The initial investment for a shadowbox fence in Woodbridge, VA will be somewhat more than other types of privacy fences because of the extra boards on both sides, but all in all, will boost the sale of your home when and if you ever decide to sell in the future. Shadowbox fences give your Woodbridge, VA home and your neighbor’s home added curb appeal because the same look is on both sides of the fence.

The Residents of Northern Virginia and the Washington DC Metropolitan Area 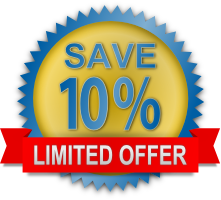 For a Limited Time Only
GET 10% OFF
Your next Hal Co fence, deck, or screen porch.